Population growth and the ‘tragedy of the commons’

Is the number of humans on the planet out of control? Here’s a look at geographic distribution: It took humans roughly 150,000 years to reach the first billion. About 130 years to reach the second billion. Maybe 70 for the third billion, 25 for the fourth. Actually, we hit 6 billion some time before the turn of the millennium–growth rates have slowed some. But what to check on this graph is the difference between developed and developing regions of the world (that is, the rich and poor countries).

Biologist Garrett Hardin says that the ‘population problem’ cannot be solved by producing more food. It requires a ‘non-technical’ solution. In other words, technology will not save us from overpopulation.

Hardin cited Thomas Malthus’ essay on the principle of population, written in 1798, in which Malthus discussed the problem of food production and population growth. Essentially, people reproduce faster than food can be produced, and inevitably a population will run out of food if it continues to grow at a steady rate, what he called a ‘geometric’ rate (think about it–mom and dad have two kids, that’s four, each of them has two, that’s eight, each of them has two, that’s 16, etc.). Hardin said that the earth has a limited stock of resources, and if the population continues to grow at such alarming rates as the above graph suggests, that these resources will quickly become depleted–especially some of the non-renewable ones we’ve discussed in class. While Malthus’ ideas turned out to underestimate the role of technology, ‘neo-Malthusians‘ who study population growth still hold to the basic premises.

Hardin used the example of a herd of cattle in a village. Imagine a village of, say, 15 households. Each household is allowed to graze one cow on the communal pasture, which produces on average enough grass over the course of the year to support 15 cattle. Now imagine that one household head decides to put an extra cow on the pasture. Because they move around, they’re hard to count, and it might not be readily apparent there’s an extra cow on the pasture. Now the pasture will of course support 16, but at a lesser weight for each. So the other 14 households see a slight decline in the income from the sale of their cattle, while the 15th has almost doubled his income, by breaking the one-cow rule. He would be called a ‘free-rider.’ You’re probably familiar with the free rider concept from small groups–ever been in one where one or more members does nothing, gets his/her name on the paper and the same grade as those who did all the work? Same concept. For Hardin, the free riders are those societies with high fertility rates and high population growth rates. The earth’s resources are finite, and the tragedy of the commons occurs when everyone’s property ‘becomes no one’s property.’ In other words, those who reproduce at higher rates are able to gain more resources for themselves, and we all suffer if the earth can’t sustain that level of resources use.

The prisoners’ dilemma is often used to characterize the tragedy of the commons. In the prisoners’ dilemma, two people are accused of a crime. They are interrogated separately. They can choose either to rat on the other prisoner (to ‘defect’ or ‘confess’), or say nothing (‘not confess’). Following are the sentences they would receive:

So, if prisoner A decides to rat on B, and B remains silent, A gets 6 months, B gets 10 years (A gets rewarded). Or vice versa. If each rats on the other, both get 8 year sentences. But . . . if neither talks, they both get one year. Now the rational decision is the self-interested one–without talking to the other, go for the shortest sentence. However, in this case, if each rats, they get long sentences. The rational behavior for the individual, says Hardin, which would lead to the shortest sentence, leads to an irrational outcome for the group. Just like adding one cow to the pasture. Just like, as you’ll see when you read the article, the rational decision to have large families in an agrarian society (to provide farm labor and social security for elders) leads to the irrational outcome of too many people consuming resources on the planet, according to Hardin. Hence for Hardin, the tragedy.

What did Hardin suggest? Well, Malthus talked of ‘moral restraint’ and ‘celibacy.’ Have less kids. Hardin concludes that ‘the freedom to breed is intolerable.’ It goes for waste as well. Too many people produce too much waste, which cannot be absorbed by the earth’s ecosystems, leading to pollution. In the end the wealthy countries will have to provide assistance to the poorer countries with higher fertility rates, according to Hardin’s thesis. The latter are free riders, says Hardin, taking from the global commons resources upon which we all depend. It should be clear who he thinks is responsible for this problem. But who should do something about it? Governments, policymakers, the market, which reinforces private ownership of property and resources? Any problems with this in the real world (how do you privatize air and water)?

There have been a variety of methods tried to reduce population. The most infamous forced sterilization initiatives were probably in India. However, even the state of Oregon is not without its dark past. China attempted to limit families to one child, although this policy is being liberalized somewhat (families with a female are being allowed to ‘try again’), and the effects have been far-reaching. Others have tried offering incentives for smaller family size. However . . . put yourselves in the shoes of a family in an agrarian society, where growing one’s own food is the means of survival, and there are few machines to help. Children become the wealth of the household–a valuable source of labor, as well as the source of social security for elders, since poor countries don’t have the resources to fund social security programs (they are not ‘welfare states’). Hardin’s solution is to increase privatization of property and resources, so that they are not available at a price that rewards free riders. In other words, punish households for having large families and insufficient money to provide for their resource needs. Even though for them that is the rational thing to do.

But there’s a complication …the demographic transition.

Another way to look at the problem

Look at the map below, which ties country size to per capita resource consumption.  : 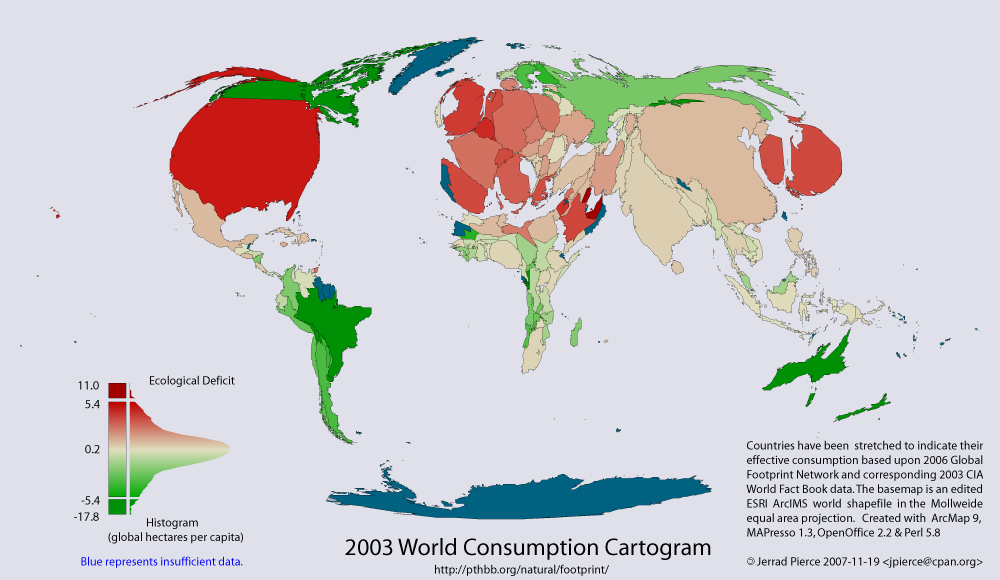 So back to the ecological footprint table, the average American uses 20 times the resources of the average person from Bangladesh. Thirty-two times as much as an average Kenyan, according to Jared Diamond. Some more statistics:

The U.S. and Western Europe (along with Japan, Russia and a few other countries) are using the lion’s share of the world’s resources. In effect, consumption in the ‘West’ has driven the globalization of the economy–other countries are producing the goods Americans and Europeans consume. Yes, China and India are increasing their consumption rates, but notice from the above table that China is still consuming at about 1/10 the rate of the U.S.

So . . . . . Hardin’s ‘tragedy’ provides us with two plausible explanations for what is driving a social problem of depletion of natural resources. Hardin’s insight that individual rational behavior can lead to collectively irrational outcomes was a valuable addition to the debate. But did he, in his haste to beat rush hour traffic and get home to his solar-heated 5,000 square foot log cabin (with two-car garage and flat screen TV), forget something (okay, I’m caricaturing …). Who are the free riders?? Do we need to consider something else? The implication here is that Hardin might have missed an important part of the picture. What counts may not be just total population growth, but per capita resource consumption. Not poor countries with high fertility rates, but wealthy countries with high consumption rates. You should be able to go through some of the questions we use to understand social problems, and evaluate the two arguments. These are two quite different ways to ‘frame’ the problem, with quite different means of addressing them.

Hardin also referred to important resources as ‘commons’ resources, shared by all, open to overexploitation by free riders. In fact, most traditional societies depended on common property resources. But, like in the prisoners’ dilemma game, if the ‘players’ have the opportunity to communicate (before the interrogation in the PD example), the outcome can change–the rational choice isn’t always to pursue self-interest. A forest, for instance, where people who overcut are punished or sanctioned, is an example of a common property resource governed by the people who use it. In a sense this is what the Kyoto protocols (and more recently the Paris Climate Accord) tried to do–come up with some rules about carbon emissions into the atmosphere. President Trump and his advisers are seeking to pull the US out of the Paris Climate Accord. Here’s EPA Director Pruitt’s evasive response on whether humans play a role in climate change.